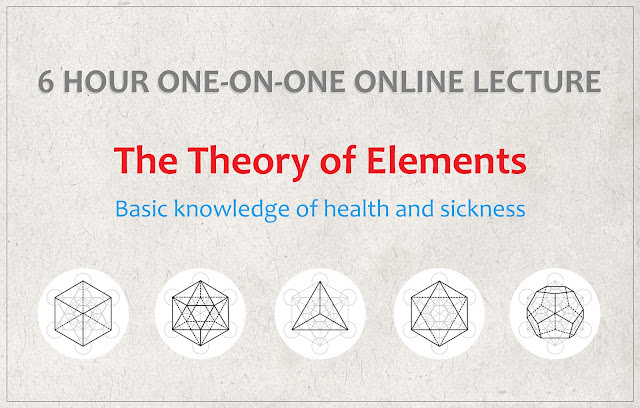 Since ancient times, different civilizations were questioning reality and what it means to be a human being. The sages from India, China, Tibet, Greece, Babylon and other parts of the world ended up with a conclusion that the best possible way to try to explain reality to the human mind are Elements. Although the Element theories differ in structure in various traditions, they all share the common role of to this day unsurpassed way to describe what everything is. The theory of Elements helps us to understand how natural forces define human life from the moment of birth, through growing, maturing and aging to the moment of death. It also helps us to understand that each of us is born with a specific quality, or better say „natural signature“ - Element constitution, a fact widely unknown or denied throughout the Western civilization, the one which takes us all to be equal, like machines. We are not. Given this natural constitution by birth, our life begins to unfold affected by numerous natural phenomena like seasons, weather, food we eat, other people, plants and animals and to all these influences we react according to our constitution. This constitution, together with our interaction with the world, as time passes, shapes our character, life tendencies, types of activities we choose, the way we react to the environment and other people, and for the therapist the most important aspect - it affects our health. For every body-mind oriented therapist, it is crucial to understand these deepest laws of nature, that is, every human has specific needs and is prone to most likely develop specific diseases. If we want to effectively counter the disease, we need the knowledge of what type of therapies and activities are recommended for each Element constitution, and how to match them. Not all people should eat the same food, what is healthy for someone,  is unhealthy for someone else. Same goes for all other activities, like type of work we should do, length of sleep, type of exercises and so on. Each of us is unique. The knowledge of these natural processes which shape our existence is really a requirement  if you want to evolve your practice to a higher level. This lecture is meant for all bodywork professionals regardless of their background, and is specifically adjusted to match attendant’s experience and current level of knowledge and understanding.

Posted by Danko Lara Radic at 10:23 AM No comments:

How Did Thai Massage Become What It Is Today ?

Recently I was inspired by a student of mine to clarify certain facts regarding Thai massage practice and how it became what it is today. Many people don’t know it, but Traditional Thai medicine had been banned in Thailand for most of the 20th century.

The ban had begun in 1923. when Western medicine overtook the throne as official medicine in Thailand, and Traditional one became illegal. It had remained illegal to practice by mid 80s, when Thai government, by suggestion of the WHO, started the so called “revival” project. The idea behind this project was to bring back the practice of Traditional medicine into the system of public health care. In order to do that, it was necessary to corrupt traditional medical practice by standardization, as it had to fit the Western academic standards which were the ruling paradigm at the time. What does the corruption mean? It means that many aspects of Traditional medicine, as it was transmitted and practiced for centuries, like the medical knowledge of anatomy and physiology, teacher- student relationship, Divination and Magical sciences, a number of physical therapies and all techniques which are difficult to learn or require a long time to master, have been removed in the process of creation of this “new” curriculum of Traditional Thai medicine. In this process, Traditional medicine was literally massacred and the “new” Traditional medicine was born. This new medicine, to this day, is heavily promoted and regulated by Thai Ministry of Health and Ministry of Education. This is the reason why we can witness such widespread confusion about what Traditional Thai Medicine is. What we have in fact, are two completely different and incompatible traditions which are commonly called by the same name. Thai massage, as an aspect of Thai medicine, has shared the same destiny. The best parallel that can help us to understand this phenomenon is the one which compares Thai massage with popular Yoga. That is because most of ancient Asian traditions underwent similar process of corruption. In the same way in which Yoga asanas were torn off from the complex body of authentic Yoga practice, resulting in “new” Yoga which looks more like fitness than spiritual practice, the same way the techniques of Thai massage have been torn off from the immense body of Thai medicine, and Thai massage created this way looks more like a wellness service than spiritual practice. This is why in all schools of Thai massage in Thailand you can learn nothing but massage techniques. For many years Westerners had thought that learning Thai massage was learning techniques – the greater your arsenal of techniques is, the better therapist you are. And it wasn’t our fault, as there was no one to tell us that there is so much more to learn out there. Even if one has mastered hundreds of techniques something was still missing. There was a huge gap in understanding the practice, and everyone who was truly honest with themselves, would admit it. That gap was either covered by artificial merge of Thai massage techniques with other, more accessible medical systems like Chinese medicine or Ayurveda for example, or with fancy massage settings, relaxing music, candles, incense, Buddha head, essential oils and many other new age props with purpose to highlight the aesthetics. This is how we ended with “style over substance” Thai massage. When our practice looks amazing but the gap is still obvious. What is this gap? The gap was created by removal of everything which has been removed in the process of creation of “new” Thai medicine and Thai massage. How this gap reflects in one’s practice? Well, one knows many techniques, but what to do with them? How to apply them? When? Should we follow a sequence? Or we shouldn’t? Is this technique indicated for this client and his/her condition? What to do? It is extremely difficult for a Westerner to find the answer to this question in Thailand. Ten years ago, it was literally impossible. In order to know, and I mean to really know - how, when and which technique to apply, to begin with, we have to know what is human body, what it consist of and how does it function? What makes it functioning? How it is affected by the lifestyle and environment? If someone is in pain, what can be the cause of it? Are we able to diagnose it? Do we know what kind of therapy is indicated in given situation and which one is not? What is the exact effect of a particular technique when applied to our complex body-mind system? The answer to these questions can’t be a vague sense of „intuition“, or a „feeling“, as we can frequently hear from Thai teachers in schools. The answer is - the medical knowledge of Traditional medicine of Thailand. The knowledge many Thais know nothing about, or have only heard of (it has been removed 40 years ago, remember?), and the rare ones who know, usually old masters, have language and cultural barrier which makes them incapable to share it with non-Thais. 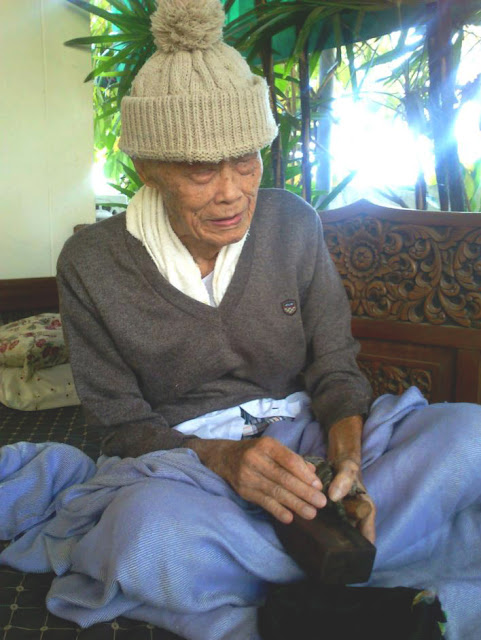 Human being is too fragile for us to apply often very intense and potentially dangerous techniques, the ones Thai massage is well known for, based only on our „intuition“. Intuition can be very blurred and questionable. If Thai massage would consist of soft, gentle, non-invasive techniques like effleurage, it could be imagined that we play guided by our intuition; however, Thai massage is probably best known for its extensive and intensive stretches, and strong pressure techniques frequently administered by elbows, knees or feet. The nature and structure of these techniques, if we ponder on, show us that the origin of this therapy had highly therapeutic purpose. If one applies the technique by exceeding the safe limit just by few inches, Thai massage turns into martial art, thus it can be very dangerous and a skill one should not easily play with.

As a conclusion - medical knowledge of Traditional medicine of Thailand is the foundation of physical therapy practice, regardless of what kind of therapy, out of many, one applies. I would paraphrase my teacher: „For the practice of Thai massage it is essential that one acts according to the medical knowledge of Thai medicine; as long as one does so, it is absolutely irrelevant if massage is performed on the floor, on the table, on the chair, in the moving train, it can be on the roof ... it doesn’t matter if oils are used or not, and it is insignificant if the client is clothed, half-clothed, or naked. The purpose of Thai massage is to solve the problem, and whenever as a therapy it might do it, one has to know how; everything else is secondary“. 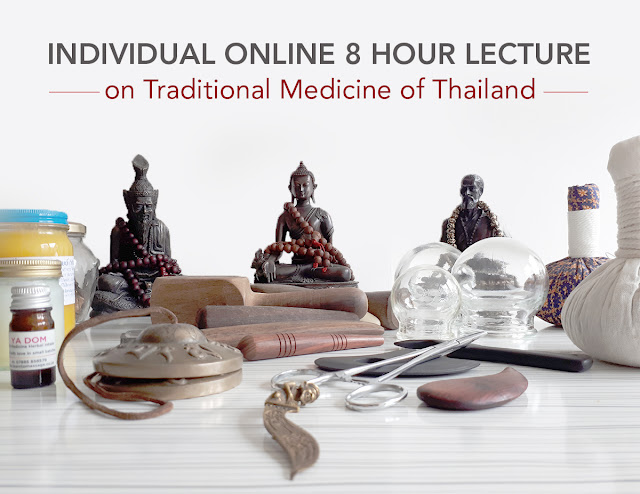 This individual (one-on-one) in-depth introduction into the magnificent world of Thai medicine can currently be an ideal way to improve your knowledge and skill during this time of no-contact. As a practitioner, you will gain a greater understanding of your practice and massage in general; by learning the basics of Thai anatomy and physiology you will understand what the body consist of and how it functions; the theory of Elements will help you to understand what causes sickness and how it can be treated; different diagnostic tools for bodywork would help you to acquire a real perspective on your bodywork practice - is massage a solution for the particular health issue or not ? Which is the Elemental constitution of the client ? What is the structure of the treatment that should be applied to the specific constitution with specific health problem ? If you have been trained just to apply numerous massage techniques, this lecture will give you a deeper understanding of when, how and why each massage technique should be applied or not. Regardless of what type of bodywork were you trained in, this knowledge will give you a lifetime insight into how natural processes shape health and disease. The lecture is specifically adjusted to match attendant’s background, experience and current level of knowledge and understanding.

For more information, please write to inbox or tttbelgrade@gmail.com

Posted by Danko Lara Radic at 5:14 AM No comments: