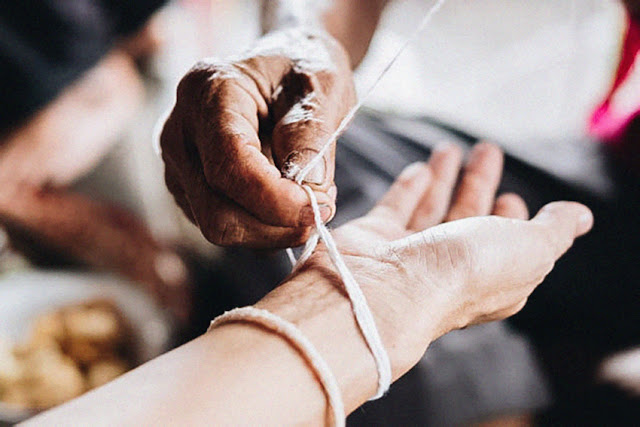 The Khwan (ขวัญ) is a specific cultural and metaphysical phenomenon found among the people of Thailand and has no adequate equivalent in the Western world. The term is very difficult to translate. Among northern Thais, it is regarded to be the vital principle and essence of life. It is also frequently referred to as morale, or spirit. The physical body has 32 organs and each one has a corresponding Khwan, responsible for the function of the organ. However, the 32 Khwan are usually considered as one Khwan, that of a particular person. In Northern Thailand, illness is often interpreted as the dislodging of Khwan.
When the Khwan is strong, stable and in its proper place, the person is in good health, called „krop samsipsong“ (ครบสามสิบสอง) – „complete thirty two“. However, when one experiences intense emotion, such as fear, pain, sadness, anxiety, sickness, loss, or sudden shock or accident, the Khwan can become lost, or leave the body. It can also be caught by various malevolent spirits or damaged by black magic. All of this can result in illness, calamity, or even death.
A fetus and a baby are not thought of as a person until the Khwan is completely settled in the body. There is no precise time when the Khwan fully resides in the womb. The baby’s Khwan does not contain any part of the mother’s or father’s Khwan. Instead, the child’s Khwan is the reincarnated spirit of the ancestor by matrilineage (lineage of the mother). The ancestor’s „outside-the-body spirit“ Phii (ผี) transforms into the child’s „inside-the-body spirit“ Khwan (ขวัญ). It is believed that the child inherits the basic characteristics of the ancestor; however, affected by various experiences during lifetime, the child grows and matures into a new person. When the person dies and his/her Khwan leaves the body, it then transforms back to „outside-the-body spirit“, or Phii, and join the ancestors until the next incarnation. This is the eternal cycle of rebirth, which emphasizes the permanence of the spirit over the temporary nature of the physical body.
During pregnancy, Khwan can enter and leave the womb freely at all time, and even after the birth the vulnerable stage is not yet over. Khwan can leave the baby, and the other Khwan can replace it. For this reason it is not recommended to massage a woman in early pregnancy as this can disturb the residing Khwan. Children generally have weaker Khwan in the same way their Elements are still weak and immature, so they are more sensitive and prone to illness. They are believed to exist both in the spiritual and the physical world. For this reason in Thailand it is a taboo to touch the head of the small children as it can disturb their Khwan. As one grows older, both Khwan and the Elements become stronger; one experiences good health and is fully involved in the physical world. In the older age, the Elements become overused and the Khwan weaker, thus old people are more prone to illness again. Same like children, they reside both in physical and spiritual world, this time gradually moving in opposite direction, from physical to spiritual.
There is a ceremony carried out to affect the status of the Khwan. It is performed usually before a person goes on a long journey or faces a risky or unpredictable situation. In such case, the special offerings are prepared, appropriate incantation is performed, and a holy thread (สายสิญจน์ - Saaisin) is tied around the wrist to bind the Khwan to the body and prevent it from deserting it. In case of illness, shock or accident, if the Khwan already left the body, the ceremony is performed to call it back to the body in order to restore health. This ceremony is called Tham Khwan (ทำขวัญ) or Riak Khwan (เรียกขวัญ) – „to make, to strengthen, to call, to reinsure the Khwan“. Additionally, Khwan ceremonies are performed in any occasion which can cause mental instability, like returning home after long absence, wedding, ordination into a monk-hood, change of status or residence, welcoming guests, etc., in order to restore the psychological balance of a person and reconnect him/her with the family, society and divine forces. 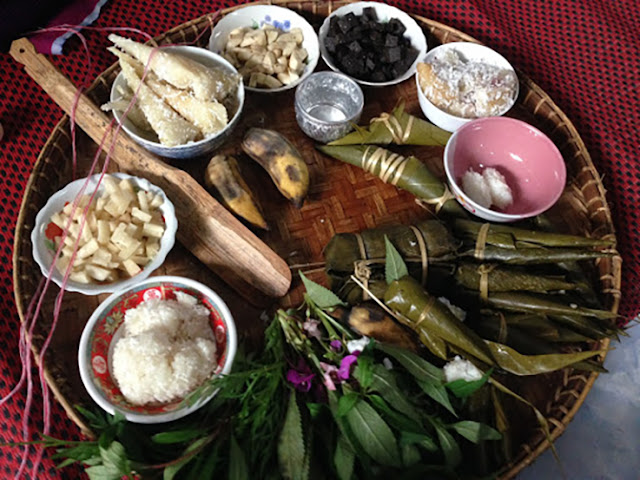 Riak Khwan Offerings
Posted by Danko Lara Radic at 10:11 AM No comments: